Today is Thursday. I’m going out tomorrow...I’m all bizz. My Mummy’s boy is bringing us out. Me and his son. I haven’t got into as much trouble at school lately, and I haven’t been cheeky or anything. And I’ve been getting off dope, and shit like that, so he is bringing me out. 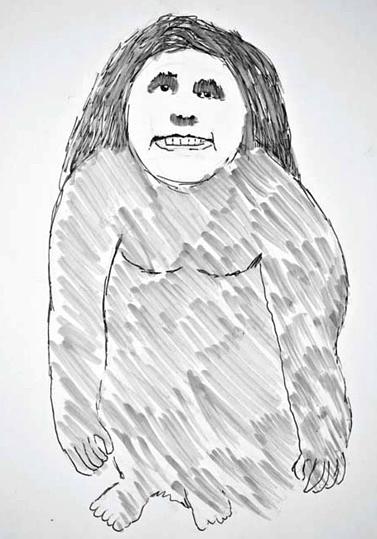 Today is Thursday. I’m going out tomorrow...I’m all bizz. My Mummy’s boy is bringing us out. Me and his son. I haven’t got into as much trouble at school lately, and I haven’t been cheeky or anything. And I’ve been getting off dope, and shit like that, so he is bringing me out. And his son’s going to do his eleven plus, and that is why he is bringing him out. I have been trying to cut down. I’ve fags in my bag and all. I’ve been smoking since I was about P6. I don’t really drink that much...just vodka and WKD.

WKD’s a Wee Kids Drink. That there is what everybody says it stands for...see? W.K.D. But it is not. We go up in the graveyard. It’s much better when you don’t know where you are going and all, and you are gripping on to people and you are going “where are you going?”. I stay in my mate’s house nearly every Saturday.

Like, every one that lived on that street there got burnt out. That’s because there was a family feud going on. I run about with some of them, but. My mate’s Da...he got stabbed. Yeah, we went up to the shop, and came back down, and we walked down the street and then he got stabbed. It was in the afternoon. I don’t know when it was, I was about ten or eleven.

He got asked to leave the street because there was so many fights, and then...what do you call it? One day a fight broke out between the families. That’s when everyone started pulling up, and it started. We seen all the cars coming in. We were at his aunties and his auntie lives up the street, and we walked on down. And then his daughter was out screaming, and then we walked into the street, and then we just seen him being stabbed.

Things have calmed down.

She is fat and ugly, right? I hate her, cuz she is a tramp. No...Because she picks on me. See if money went missing, she would turn and go, “Aye money went missing. I wonder who it was”. And I am standing going, “Ah well, it wasn’t fucking me, right?” And she goes, “Ah well, I don’t know, so, I don’t know”. And I’m standing there going, “It wasn’t me”. Then she turns and goes, “That was you. I know by your face”. Your standing there going, “Ah, was me. It was me”. And she goes, “I know it was. I know it was”. And you’re standing going, “Right well. Right well. Piss off”. Then I just start fighting with her, and I end up digging the head off her.

I walked out of school…because I am bored, and school is shite.

Susan seen me at the start of school, and then I turns to her and said, “Do you want to run out of school?” and she went, “When will I see you? First class?”. And she said, “Why, what are you in?” And I went, “Eh, Science”. And she went, “Right” and then she came and got me. She says “Are you coming Alex?” and I went “Yeah”. The teacher goes “Alex. Get back here right now!”. Here’s me, “No”. I refused to go back into school. I know I am stupid.

I know I am supposed to work. You get locked in this room. Like, what do you call them? With filing cabinets in front of you…And they bring in your work and all, and they bring your dinner till you. I watch TV sometimes too, like. There is this here other room, but I have been in tutorials from, what? First year up. There is this here big flat screen TV in a different room. We watch TV...It’s about joyriding and all. That’s what you shouldn’t do and all...and stuff like that.

My Ma’s fella...I call him Soupy. He’s alright. I used to throw his clothes out the window, and his shoes and all...and used to go, “You are not coming back in this house again”. He just goes out and lifts them up and says “See when I come back in the house…?” And I would say, “Come on, big boy...” He wouldn’t come up anywhere near me. I would beat him down the stairs.

Yeah, my Ma’s in love. She doesn’t know what the meaning of the word. Ach, I like him now because he gives me money.

R– What do you think the meaning of love is?

R– Tell me what love is, describe love.

A– It’s shit. I don’t know. She gives me money, and more money, and more money. That is all I want. I love money. I don’t want kids. No...see if I ever have a kid...? As soon as it pops, it’s going to be standing at my front door, and I am going to have it’s bags packed ready, and I will take it to wherever the Dad is. And if it won’t crawl or walk over, it is getting booted over. See if I...and that thing’s started gurning?

I would just lift it and throw it out the window and go asleep again. I wouldn’t even hear it crying.

I have one brother and five sisters. One is older, and the rest are younger. Don’t even get me started. See when they are crying, I just go, “Shut up”. I beat them and all.