Where was I born? Outside an elevator in the Royal. I swear to God. Cuz my Mummy told me. She was still wearing her clothes and coat and everything...and she had to take them off, and when I was born she still had her coat on. 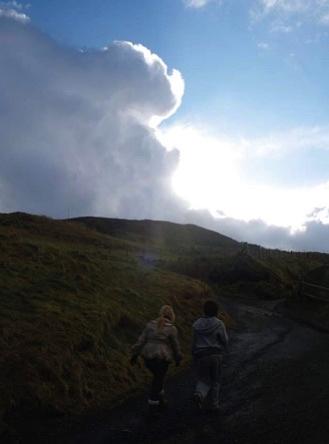 Where was I born? Outside an elevator in the Royal. I swear to God. Cuz my Mummy told me. She was still wearing her clothes and coat and everything...and she had to take them off, and when I was born she still had her coat on. Here, do you know how I found out? I was sitting in the elevator and she goes, “Here Catriona, you were born out there” and I turned round, and there was all wee lads laughing. And here was me...I was scundered. My whole face just went red. She told me in front of everybody. I was like...why didn’t she tell me in the house or something? My Mum is not a sensitive person. I don’t really talk to her.

I don’t live with her. Cuz she took a stroke. She just took a stroke. She’s paralysed...left hand side. I don’t care. It’s her body. She deserves it. Everything she does just falls back on her...it’s karma. It doesn’t happen from nothing. She is a bitch to everyone. She is just selfish.

I have six sisters…I know; it’s a nightmare... and two brothers. So there is nine...ten. One is fostered but …one’s fostered. She didn’t think nine was enough.

Well it was like...she was trying to get us up for school, but I wasn’t well and I went up to get the kids up for school, and she said to me, “Would you hand me that water?” and I handed her over the water, and I went out and I came back in and she had the glass still in her hand, and I went into bed. I heard a glass smashing, and like...her whole body was, you know, like going down. And I was like…but I thought she was drunk.

We thought she was drunk for a whole full day. And we didn’t bring her to the hospital until the next day. We had to lift her...completely lift her to the toilet and all. She couldn’t move. They says if she had’ve gotten here faster she could have been better, cuz like...her brain was burning away faster.

So… I thought she was drunk. See when I found out she was having a stroke? I was like...what’s that? I was twelve. Aye, I called my sister in, like. My big sister lived with us. Her and her boy lived with us. I called her in and she says, “She must be drunk” because she was drinking the night before, and that’s how she took it... because of her blood pressure. So we decided to leave her. In her bed.

It was funny, but...it is terrible. But it is really funny. See when she was in the hospital and all? She was talking, and her mouth was down like that. See when we talk about it? It’s just so funny. She even laughs at it. She was in the hospital all together for six months. She had broke her hip and collarbone for trying to get out of bed. Aye, she tried to get out of bed and all, to walk, because she didn’t want to be paralysed, and she wanted to look after us. But she took us back after she got out of hospital, but she couldn’t look after us...and I just went nuts. I used to go missing and all. Because I got away with it. I knew I could get away with it, so I did...and then I got took off her by the social workers.

I got put into care, and then I got taken back out, and then my sister took me in. I hated it. It was only for a couple of days like, for just like...a punishment. I don’t know...the social workers said it was a punishment. But I just laughed. I didn’t think it was a punishment. I wasn’t running away...as in running away. I was going out all night and not coming back home. Cuz I was enjoying myself too much and just didn’t want to go home. When I came home and the peelers were out looking me...I was like, all right. And my whole family were standing there waiting for me, and I was like “Oh, I am going to get beat”. I am surprised my Ma didn’t hit me, actually. She hit me the day before I went. I hit her back, but. That’s why I ran away. She hit me, and I pushed her, and she said, “Get out and don’t come back”. So I didn’t. I was missing for like...three days, or something. And she said, “You were on the news” and all. And I said, “I don’t care”.

Me and my Mummy was never close. It was usually me and my Daddy. Yeah, he died when I was seven. It was always my younger sister close to my Mummy and me close to my Daddy. I don’t even think she had feelings for me. It’s like...we never got on, like. She brought me to the pictures on Saturday, and I was just so close from ripping her head off. Yeah, cuz my wee brothers were doing my head in, and I was slabbering at them, and she was slabbering at me. And I said, “Why did you have to have so many kids?” and she said, “Why did I have you? Why did I have to have you?” I was like, “You bitch”. I was like “Don’t even talk to me”.

Yeah, I just wish she didn’t have so many kids. Well, I do love my family. I do love it being big...but it’s just annoying sometimes, with them all running around...just having them being there. I love my Mummy, but I don’t think she loves me. Like, I say to her all the time, and she says “I don’t love you” and I’m like, “Ah, fuck you”. I don’t know...I say to her all the time, because I was close to my Daddy, and she says, “I don’t give a fuck who you are close to”.

Aye, but there is always one of us that don’t get on in the family. Well, I am always the one that doesn’t get on. Because I’m just always nasty. I am nasty to my family, though. Ach, my Mummy is going to die soon. I went to a card reader, and she said she was getting better. But that is my personal feeling. She wants to die. That is all she does...sit in the house and cry. Well she is my Mummy. I love her, but I just can’t stand her.