I’m fourteen. I want to be...em…there’s a list. I want to be a dress designer, a photographer, or a chef. At the minute, all I’m doing is sketching dresses, so I am. I was in a car crash a couple of years ago, and I had to get an operation so I did. 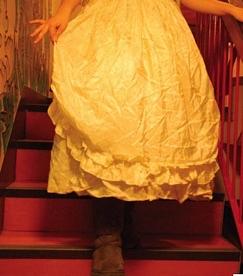 I live in Ardoyne. Em...but it’s really not that good. Because it’s really dirty and all. It’s just really noisy as well. The gig rig week in the summer is good. They have competitions, so they do. It’s really good. They play music too. I was born in the Royal Hospital.

I’m fourteen. I want to be...em…there’s a list. I want to be a dress designer, a photographer, or a chef. At the minute, all I’m doing is sketching dresses, so I am. I was in a car crash a couple of years ago, and I had to get an operation so I did. I had my big intestines ripped and…and I had internal bleeding. Well, my granny was on the Sligo Road, and this car...You know the way it’s bendy? Well this car was going straight and my granny swerved, thinking she was going into a straight piece of land. But she never. She went into a ditch and she hit a wall or something.

It’s alright growing up in Belfast. The troubles? All I know is about the Holy Cross Troubles. I didn’t join it until the end. Like, I joined it in P5…but I heard about it. I heard that the Protestants were walking up the road, and like…I don’t really know much about it. The Protestants were walking up the road protesting against something, or something...and some people got injured out of Holy Cross. A couple of wee girls I know just got injured out of it, so they did. I can’t really remember that much about school, but I got bullied a wee bit so I did. The girl bit me, and put orange things up my jumper. But I don’t want to name her name, because we are friends now, so we are. I told my teacher, but she just shouted at her. She didn’t go to the principle or nothing.

Holy Cross was really really good. They put me up to my level and made sure I understood the work, and all. The protest was over by then. I think it is bad, to like, protest near a school. But I think protesting is good to get your point of view across...I think, so I do. But I think it is not necessary to get violent about it.… Yeah we done a cross community in P6 or P7. I think it started in P6. It...but...em, Peace Players. It’s like, international basketball. People from around the world…and we play basketball. And we went to a Spring Jam, which people...Catholics and Protestants...we all came together and played basketball. And we also done this day with Wheatfield. That’s the school across from Holy Cross. We played...em...went to a sports centre and played basketball. I thought it did work.

I don’t see it as Protestant and Catholic, I just see it as a person. I don’t think it is them. It is just a person with different beliefs so it is. That is what I see it as. I don’t really have that much friends, cuz like, I was really close to this wee girl, and she moved down South. Cuz, like, I am really shy, so I am. And she moved away, and I got really lonely. So I came up here to Quakers, and I made friends with a girl, and then we became really good friends. I don’t really go out. I just don’t go out, so I don’t. I don’t know really...cuz I just don’t go out, so I don’t. I just sit in the house, so I do. I am not too sure why. Yeah, I watch TV. I have a TV in my room. I go up, and when Mummy and Daddy are watching TV downstairs, I watch TV upstairs and when they go to bed, I go downstairs and watch Sky.

Me and my Mummy fight, but. Yeah, we kill each other in the house. Oh, I’m a very bad tempered person. See when me and my Mummy are fighting? I slam every door in the house, really really loud, so they know that I am angry. I get angry when I’m told to do something I don’t want to do, but I am made to do it anyway.

I worry mostly about that. It’s em...my scar. It’s my scar, so it is. It’s across my stomach. It is that size...from there to there. It’s nearly invisible. It’s almost gone away. It is gone, but it’s like...it’s gone nearly my skin colour. They said if I have a child, I would get a free tummy tuck. Yeah, cuz see the way your stomach is up here? Your stomach is there, but my stomach is below that. Yeah, cuz of the thing. Em, so I would get…they would give me a free tummy tuck. The plastic surgeon said that.

Em...well, see before the car crash? I was really really confident, and then after...just not that confident, and that. Afterwards I felt really shaky. You know, they never gave me no counselling about how I felt...so Mummy and Daddy is going to try and get me counselling, so they are...if they can. Because it is in my head, and sometimes I have bad dreams about it. Yeah, it’s going over and over in my head. Scary. It’s like happening, like I am sitting where I was, and it’s happening all over again. That whole day...in my dream. My granny...she doesn’t talk about it, so she doesn’t. I don’t really talk to her about it, so I don’t. Cuz like...I like...know my family, so it would be easier to talk to strangers.

It sounds weird, but because you don’t know them ones, counsellors would be easier to talk to. Maybe they could give me some advice on how to cope with it. And see there after a couple of...like, granddad died so he did. Like, a month after, so he did…a couple of weeks. I don’t know. He took a heart attack…I don’t really know. He just dropped dead, like some people do. And my granny died about a couple of weeks ago. She had cancer. I don’t really talk in the house, so I don’t. Not much. I don’t really like talking that much. Before my car crash, I used to talk all the time. I even got shouted at by my Mum and Dad for talking too much, and then after I just didn’t talk that much, so I didn’t.

The money it hasn’t came through yet. I’m going to go to University to study Fashion Design, and I would like to go to Miami...travel the world. I’d like to live in London though, and buy a car. I won’t have to take out no student loans. Cuz my Mummy and Daddy says they take it out with interest or something.

R– Do you live near a Peace Line?

It’s wild round near Old Park. There is like, all police and all. I don’t go out because of the rioting. I don’t go around there. I know where it is, but I don’t go around to it. I only used to go to the Old Park when my Granny was alive. You go down Jamaica Street. I thought this morning...I thought it was lovely. There was all trees, and all the leaves and all...and bushes, and it was all covered in snow. It is gorgeous. That is where the Old Mill is. And there was a Dunnes Stores that’s shut down now. I would change Ardoyne...make it tidier. Make more stuff for kids…like teenagers. There is hardly anything for teenagers to do. Yeah, there is a youth club but it’s not like, for teenagers. There are single mums…but like, it’s their decision to get pregnant. They can think before they act, so they can. We haven’t got sex education in school yet. I am fourteen now, and you have to choose to do sex education. Yeah, we choose to do it.

At school the science teachers get us to write a page out of the book, and this girl just...she throws everything, and screams over the classroom. The teacher doesn’t say anything. He just sends her out. People who disrupt class annoy me, because I just want to get my work done, and I want to learn. It’s just like...the classes. They are just really, really boring sometimes.

At break and lunchtimes, I usually just bring a book and read, so I do. Or I draw...Dresses and clothes. I will bring it up because I took them out of the book and put them on the wall. I am taking French, because I want to go to Paris. I know, like, half of it so far, and I am really good at like saying “Hello, how are you?”