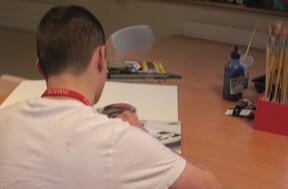 I have been in Hydebank now for 10 months. Today I’m in a good mood because I had a visit with  my mum this morning. It was a good visit. We always have good visits; I never had a bad visit with my mum. I had a good chat with my mum and we had a good laugh. The visit always lasts an hour.

My name is Conor. I was born in 1993 in Derry and have lived there all my life. It’s a nice wee place. It’s the culture and the people in it that make it good. I have a wee brother and three big sisters and one wee nephew. When I was two, my mum and dad split up. My mum then met my step dad when I was five. I’ve always lived with my mummy. My childhood was brilliant! We used to go camping and fishing and to the amusements in Portrush. It was brilliant going on the go-karts and all - good aul craic.

Primary school was brilliant craic, and I had loads of mates. I can remember getting lines at lunch and detention. I used to mess about, getting into trouble wrecking the place. Looking back, I regret it. I wish I had done better in school. School was the best days of my life. Secondary school was the same but with more trouble. I started getting into the wrong crowd. By the time I was 13, I started smoking dope. My friend’s big brother had some, so we tried it and ended up liking it. It’s one of those things you either like or you don’t. I was smoking it every day. I can’t remember the first time I took it. I didn’t see any problem with it at the time. I shouldn’t have taken it too far. I was using it too much and was taking advantage of my mum by getting money off her to buy dope and drink and all. I told her I was taking a wee girl to the pictures or bowling or something.

When I was 14, I started drinking; it was just a few bottles. I started because I was watching all the older boys doing it, and I was acting big. I loved drinking. It was good craic. (When I get out I’ll still drink, no bother. I’ll be drinking less, though, and I won’t be taking drugs.) By the time I was 15, I was staying out every weekend taking drugs - any drugs I could get my hands on for the craic. I think smoking blow was a gateway drug for me. It was blow, drink, then other drugs. I was trying to act older than I was. I think I was trying to build myself a reputation. I started getting into the wrong crowd again. Now, I was stealing at least two cars every weekend just for a bit of craic. At the time, I was trying to act big, showing off in front of people. One day I took it too far; I wasn’t thinking straight. Then, I got caught.

I got sentenced to a JJC order (Juvenile Justice Order), but I breached it. A JJC order is where you meet your victim and have to  say sorry and do what they ask you to do. For example, community service or someone asked me one day to do a charity run. I didn’t get to do it, though, because I got lifted before the run happened. I wasn’t sticking to my curfew or my tags and was still going out doing crimes. But, they couldn’t prove it. It ended up they took me to court one day and sentenced me to Rathgael for six months. I got out just before my 17th birthday. On my 17th birthday I relaxed, I got all dressed up, and went to a bar with my big sister and a few of my mates. We had a drink and a laugh and took some MDMA, (the purest form of ecstasy). You don’t eat it-you can rub it round your gums or put it in a skin and bomb it. Then, we all headed back to my house and sat up drinking all night. My mum put a big amount of trust in me and let me go out and have a bit of craic without phoning me all the time.

This brings me up to New Year’s Eve. One of my best mates died. He choked in his own vomit. We were out partying for three days together and I headed back to my house to meet my girlfriend, then woke up with my phone ringing at 8 in the morning. It was another best mate – he told me the craic. He told me he was dead. I smashed the phone off the wall, got up, got dressed, and went out to see if it was true or not. I went up to his mum’s house. She wasn’t in, but his wee brother was there, and he told me it was true. After that, I just hit the drink, was back on the drugs flat out, and went back to stealing cars. If I had of got counselling, I probably would have dealt with it better. But then I wouldn’t have went to Hydebank and got myself sorted out. I would probably have ended up dead or still doing the same thing I’ve been doing.

My best friend’s death made me feel very sad and angry. I was angry that he was dead and that I couldn’t see him again or say goodbye properly. I just wanted to drink and steal cars. It was the only thing that could take my mind off my friend’s death. I was on the run, because I breached my bail and ripped off my tag. I ripped the tag off shortly after my friend had  died. My friends were also caught and were taken to the police station. I managed to get away, although I ended up  walking into the police station and handing myself in. I ended up handing myself in to the police for being in a stolen car. I had nowhere else to go. I was fighting with my mum, and I wasn’t going to let my friends take the blame for something I did. I told them I bought the car and they believed me. They’re not going to ever believe me again. Not a hope!

I was in the police station for three days. I was interviewed and then brought to court on Monday morning. I got remanded to Hydebank and have been here for 9 months. The time flies in here—you’re always busy. It’s not the worse place in the world, although I’d rather be out. I’m hoping to get out three days before my 18th birthday and that’s in December this year. I want to stay with my mum until after Christmas. Then, I want to go to Liverpool—over to my big sister. She hates drugs and if I mess up once, that’s me done. Her boyfriend is giving me a job doing labouring. I’ll get a few hundred pounds a week. I want to save up and get myself a nice wee flat, a wee car, and send my mum a few quid to pay her back for what I owe her.

I want to get out of the area I live in to stop me coming back to Hydebank. I want to stop running about with the crowd I was hanging out with. It won’t be easy, but it’s all about making choices. If I could turn back time, I wouldn’t drink as much or take drugs as much either. And wouldn’t do crime at all. It’s not worth it in the end. Fair enough, you get a buzz of a night or two, but it’s all about the consequences after. I didn’t have any remorse for the people I hurt or did damage to when I was on drugs; but off the drugs, I have thought about everything I have done and realize I wouldn’t like it done to myself or my own family.