With one flick of his finger, he pushed the first domino which then hit the next which hit the next and one by one the dominoes fell until the last one fell down completely. This domino effect reminded me of my life and my life’s journey. 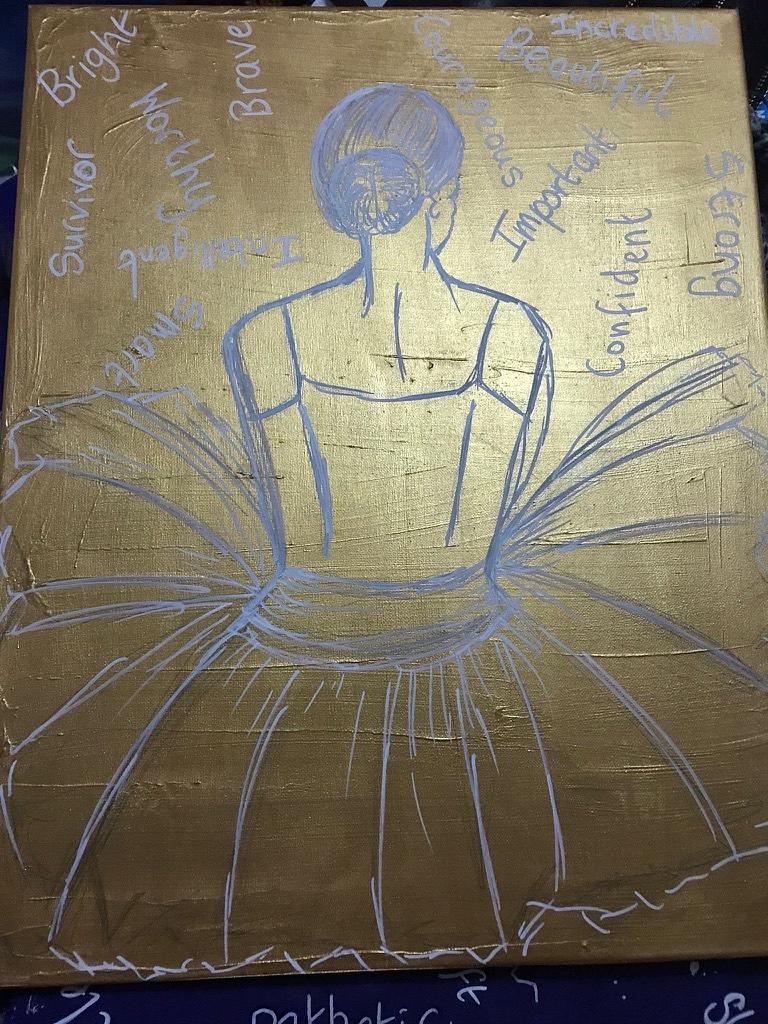 On my son’s birthday he got lots of nice presents but his favourite by far was a tiny tin with baby Yoda dominoes in it. I watched as he carefully opened the tin and placed the dominoes in a snake style on the ground, standing them all up carefully. With one flick of his finger, he pushed the first domino which then hit the next which hit the next and one by one the dominoes fell until the last one fell down completely. This domino effect reminded me of my life and my life’s journey. I thought about this comparison and realised how the first domino had to fall to cause the rest to fall. This comparison to dominoes is an analogy for my life. I’ve been through trauma, domestic violence, family court, and poor relationships but if I’m to think about the first domino that was responsible for the rest, I think of how I was groomed as a young teenager by my elocution coach. I didn’t know at the time I was being groomed. I also didn’t speak up about it because I was afraid. I went to private elocution lessons and did really well at poetry, prose, drama extracts and public speaking. I was top of the class. My teacher then in his 20s would walk me home and recite poetry and Shakespeare, I felt special and loved the attention. The only thing I didn’t like was the lies, lying to my parents about my whereabouts and pretending I was staying longer at classes but really, I was seeing this teacher.

He started taking me to his grandmothers when she wasn’t in and things got mature. It’s not something I’m proud of and I’ve spent a long time blaming myself, but I need to remind myself over and over again I was just a kid. He used to quote me Shakespeare and every time we parted, he would say ‘parting is such sweet sorrow’ and then the words ‘I love you’ which made me think what he was doing was all OK. I was even questioned by police, but I didn’t tell them anything, who would believe an ordinary teenager from an ordinary working-class home over an educated, posh speaking man who was a teacher. This experience in my life dominoed into me making poor choices with men. I did have some healthy relationships but mainly abusive ones. Perhaps a part of me thought that’s all I deserved.

At one stage the world was my oyster. I was at university, and I did some travelling but always fell into the same traps regarding choices of partners. After surviving meningitis and encephalitis I moved to England and secured a permanent teaching post. I was spontaneous and lively. I met an interesting man and ended up pregnant, he moved in with me, and then one day I woke up to a note to state this wasn’t the life he had planned, and he wanted to be someone and become somebody, and a baby didn’t fit into that scenario. I didn’t choose to be a single mother, it just happened.

I left my permanent job and returned to Northern Ireland. Perhaps I was too optimistic and thought I’d get a job easily but due to a breakdown of family relationships this dominoed into becoming homeless. I then fell into the benefit trap which in turn dominoed into loneliness causing immense stress and anxiety in my life. At that stage the dominoes kept falling. I was purely on my own. The loneliness was so difficult and perhaps it was that in itself that persuaded me to use online dating. There were a few men I was chatting too and two stood out. Not that I necessarily had my pick being a single mother and all, but there was one who was amazing and really invested in his family. I still wonder what if. After speaking to the two of them for a while I went with who I thought was the safe option, he wasn’t a drinker, or a smoker and he was into his health. On paper he sounded amazing, but I was so wrong. Little did I know this domino in my life would cause so many more to fall. It started with the snippy comments about my weight and my scars on my body calling me ‘dot to dot’, he would apologise and do something nice, and I forgave him. Then it was comments about what I was wearing, my weight, my height, my hair colour, he asked me to stop wearing make-up as I was making myself attractive for other men. He was trying to control who I was friends with, who I was to talk to and where I was to go. He also isolated me away from some of my friends.

I honestly didn’t understand that abuse came in all different forms. The verbal abuse turned into physical. At the start it wasn’t much as it was just a wee shove, and he would state ‘oh you must have lost weight and got lighter as I only tapped you and you fell’ it was like I was being complimented and abused at the same time and it was confusing, but I believed him. I believed no one would want me and I couldn’t get anyone else or rather NOONE else would want me. After all he was right, my whole body was full of scars. I wasn’t a perfect size 10 like I was before, and I was curvier now.

His comments dominoed into me having low self-worth and low self-esteem so I just continued dating him always thinking things would get better. When we were in Donegal standing at the monument in Donegal town, he didn’t like something I said, and he pushed me so hard in front of my daughter that I banged my head. I thought that was the end of us until a few weeks later he produced an engagement ring. I’d never been engaged before, and this was amazing news. Perhaps he realised his wrongs and wanted to put them right. When we first met, he didn’t want children and all of a sudden, he spoke about having his own child with me and how I’d make a good mother to his child.

Once we planned this child it wasn’t long before I was pregnant. Looking back now I was trapped, trapped with the engagement ring and trapped with the baby. It wasn’t long before I realised I needed out when he hit me so hard I was afraid for my life. This all started over him accusing me of seeing someone else. I didn’t realise the trauma I had endured and my children too. I wish I had been braver and stronger and went to the police to get things documented more than once. Had I done all that I could have stopped a lot of those life’s dominoes from falling. Unfortunately ending a relationship does not end the abuse. I was trailed through family court, and I discovered that the judicial system can be used to further abuse a victim.

The court domino deeply affected me and currently this domino has fallen again. I ask myself when will this ever end? The perpetrator whether male or female can continue to abuse the victim through the court process having adverse effects on their mental health.

This time round though I am stronger and in a better place in my life. Through projects like Quaker Cottage, I have learned coping mechanisms to deal with certain situations life throws at you. This particular story telling project has allowed me through the medium of art and dance to heal from my past traumas. It has provided me with the coping tools I needed to heal from the past pain. The facilitators knew from my story my ex abuser used to shout ‘You’re too fat to dance’ and although years ago I was a dancer and a choreographer I lost sight of who I was through low self esteem from my continued abuse. The facilitators encouraged me to look at other ways to explore my story through my talents. This project allowed me to find my old self again. I discovered that no matter what my size I love to dance and I shouldn’t hide that part of me but embrace it as it’s a huge piece of who I am. I am also proud to say I have my faith to help me through this process and this journey and I will be eternally grateful for this. My faith and belief in myself now through this project and my spiritual faith.

Although my abuser is using the court system as a further platform for abuse, I hope by telling my story that I in some way help someone or at least aid them in some way. I don’t want all I’ve endured to be in vain and it’s projects like this that allow us to come to terms with all those life’s dominoes but also that coming out of this we are better people through surviving this abuse. I am a survivor of domestic violence and whilst grooming was the first domino that fell in my life, I am now standing tall and strong, brave and courageous throwing all the fallen dominoes back up and they will stand tall like me.