‘LIVE to inspire others’ is the motto a young mental health advocate is using in his quest to overcome his own demons while helping others following a suicide attempt one year ago. 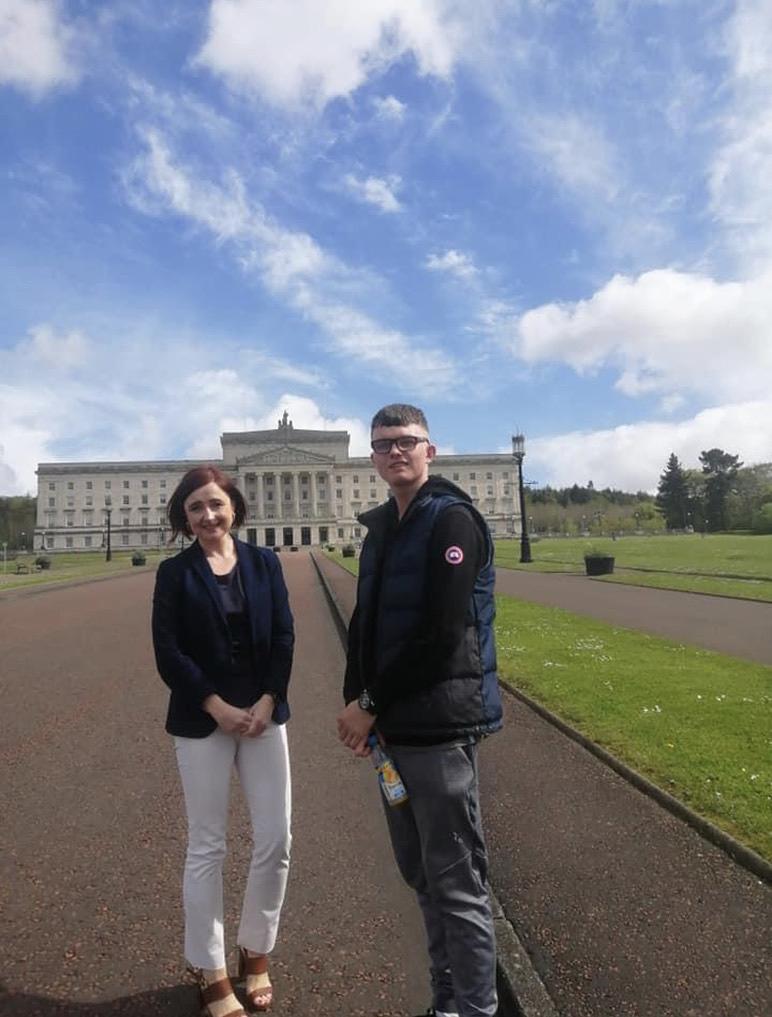 LIVE to inspire others’ is the motto a young mental health advocate is using in his quest to overcome his own demons while helping others following a suicide attempt one year ago.

Gerard Mullan remembers being woken by a man minutes after he had jumped off Arthur Bridge in Newtownabbey, falling 30 feet onto the hard shoulder last January.

The then 16-year-old from the Whitewell area of north Belfast had been suffering from ongoing depression and mental health issues.  He had spent the day drinking and taking drugs to escape from his pain and spiralling descent into hopelessness. And despite having overcome so much in the last year, Gerard told Sunday Life that it is only recently that he has started to remember the events of that fateful day. It was just after midnight when Gerard was found and every time he is drifting off to sleep, jigsaw pieces of that night slowly come back to him. “The bridge is about 10 minutes from my house, and I have to walk over that way sometimes and it is hard,”

Gerard explained. “Thinking back to that day leading up to it, I remember just feeling so fed up with life.I was drinking a lot and was blinded by so much emotion and I remember thinking I just don’t want to do this anymore. I went out drinking with my friends as well as taking drugs and I think that made everything seem 10 times worse.”

Gerard said he recalls fighting with some of his friends and then telling them he was going home.  He walked himself to Arthur Bridge, climbed up and jumped over.

“When I woke up, I didn’t know where I was,” he said.  “I remember a man leaning over me and I didn’t feel any pain even though I had suffered a head injury, fractured my pelvis and badly damaged my kneecaps and heels.”

He was transferred to the Royal Victoria Hospital where he spent some time recovering and was allowed to continue his rehabilitation at home once a mental health package was put in place.  “I couldn’t walk at the start and the head injury has left me with a big scar,” he added. “I couldn’t leave the hospital until the mental health team approved that it was safe to do so and I was under a suicide prevention team as well as suicide watch.

“I can remember one of my old counsellors from Beachcroft, where I had been having counselling sessions, came and visited me and they were really upset.”  Gerard said he has found it especially hard to cope with the aftermath of it knowing the pain he could have caused to his mum, Aine Mullan, and his family and friends.

“My mummy was devastated; she was obviously relieved that I was alive, but I don’t think she’ll ever come to terms with what happened.  “With my friends too, it’s sometimes really hard because when you survive after doing that you have to come home and face everyone.

“All the people in your life are so worried about you but it kind of feels a bit intense sometimes; like you can’t go anywhere or do anything because people are worried you might try it again.

“Obviously, it’s because everyone cares about you and to think of the pain I would have caused had I died that night; well, I can’t even begin to process that.”

Shortly afterhe returned home from hospital, Gerard joined the Quaker Teen Project who he said he owes his life too. He has been fully involved in their MyStoryYourStory project which gives young people a platform to share their stories and raise awareness of mental health issues with the hope of making a change.

“Working as an outreach worker is all about giving people advice and linking into personal experiences,” he explained.  “While I am still exploring my own mental health, I can now tell my story of what happened and of how I recovered and how I ended up where I am today. I am very grateful that I can now share my experiences with other people.”

Gerard is very passionate about raising awareness on the fact that north Belfast has the highest suicide rates across the whole of the UK and Europe.

“We need better mental health services here in Northern Ireland and what we need in our communities is a centre where people can go to if they’re feeling down and  you need to just sit and have a cup of tea and have a chat.

“There should be a counsellor on stand- by too for anyone who is in need of that service.

“The outreach work has been hard to deliver with the lockdowns but even before Covid-19kicked in, youth clubs were closing due to lack of financial support and funding was being stripped away from community initiatives.”

Gerard has adapted his outreach work to his social media pages including Facebook and TikTok where he posts daily videos with some informal inspirational talks.

He is currently undertaking a mechanic course at his local technical college and understands the problems students are facing with remote learning.

“The fact that so many students are doing learning remotely I think will have an impact on their mental health,” he said.

“Some children need that routine, especially if they have additional learning needs and that’s why I try and get online as much as I can and upload videos daily because there are young people suffering through this.

“Being in your house most of the day could bring thoughts on people that they’ve never had before.”

Looking forward to a much brighter future,, Gerard intends to pursue his passion for helping others and will be commencing a level one and two leadership OCN (Open CollegeNetwork) in youth work.

He hopes to continue this with studying at university in a youth work and mental healthcare degree.

“I hope to be a youth worker in a school setting or a leader at Quaker’s Service,” he added.

“I look at where I am now and try to look at the positive side of things.

“I was so close to what could have been the worst thing and now I’m in the best place I could ever be and that’s the outlook I have now.

“Anything negative that comes into my head I turn it into a positive now and I live to inspire others.”