"I would like my story to be out there for young people – I hope it can help someone. I was raped when I was 12 then after that my life went pear shaped. I started taking drugs, I was sniffing and all and I ended up in a psychiatric unit at 14." 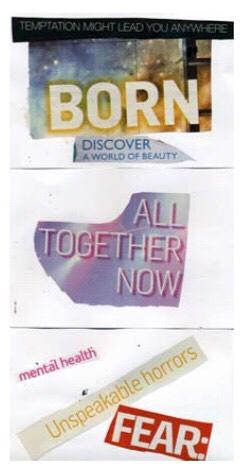 I would like my story to be out there for young people – I hope it can help someone I was raped when I was 12 then after that my life went pear shaped – I started taking drugs, I was sniffing and all and I ended up in a psychiatric unit at 14 - In Foster Green hospital.

I was taking drugs up until I was 17 then I fell pregnant with my son Phil. I was in a long relationship with his daddy, but then he got put out of Belfast for selling drugs – we had to move all over the place. I was even living in Scotland for a while, I was 18 at the time – we kept moving back and forward then eventually we got a house in an estate just outside Belfast but things didn’t settle down there either. Phil ended up living with my Mummy – and she got the full rights for him in case something happened, so she could take him to the doctors and get him treated.

Then in 2009 I went into rehab. It was brilliant when I came out again. I was in for a week, before I was suicidal and drinking really heavy. I came out of there and everything was good for a while until I went to a party for someone in my boyfriend’s side of the family and got sexually assaulted in my sleep. I knew who it was. Then – my head just went completely – I hit the drink really really badly – the whole year was awful. It ended up getting worse though.

I went for a break with my boyfriend and we got into a fight with a man who was getting on like a creep among the young ones where we were staying. I think he was a paedophile – He was all round the kids – the wee kids were coming telling me that the man was telling them they had nice bums and that they were going to have pubic hair and all – It went on for a while then I just took the matter into my own hands. Everything was going through my head about what happened to me. I got up and started on him – I ended up throwing a chair at him. I think it hit him but he threw it at me then missed me and hit my boyfriend. He then started fighting with the man. I thought he was just punching him but he was stabbing him, it was pitch black. I ended up getting lifted for attempted murder but it got dropped to GBH.

I ended up going to Jail – it was the best thing that ever happened to me. It got me off everything, drink – drugs – medication – anti depressants, everything. They more or less put me in jail to help me and it did help me like. In there I could have all the drugs I wanted but I just kept saying no, no, no, no. I was good in jail so I got out in the last couple of months to work in the Quaker charity shop a few days a week. I loved getting out of jail, I felt like my life was going somewhere again. I hated coming back like, hated it. I remember seeing the gates on the way back in and dreading it – made me feel sick. I loved the whole experience of working in the shop – putting the clothes away, pricing them, I was able to work on the till serving the customers and all, Eileen the shop manager let me do everything. I loved working with her – you had the same people in every week and I loved chatting away to them. I used to get a £5 a day for your lunch and just to go across to Marks and Spencer to get something nice to eat then go back and tell everyone in jail I had sushi for my lunch, just to rub it in.

When I got back out again I was living with my mummy, things were just a wee bit hard being back outside again, I was in jail for a year. I started drinking again and then I met the devil of a man called Neil. I moved in with him and after 6 months I married him – which didn’t even last a year. He started beating me and everything so I started drinking more. He even started beating me on our wedding night – in the hotel. Before the wedding I took my implant out – I always wanted another child, I didn’t care who it was with. So I’m pregnant now and loving it. I left him though, I was sick of constantly getting really badly beat up – I phoned the police when he was sleeping. The police came and arrested him and I haven’t seen him since. I have dropped the charges as he promised me he would give me a divorce and leave me alone if I did.

Sometimes I feel like God is punishing me – once something good comes along it gets taken away from me.

I met my boyfriend now at probation and he said he would look after me if I left my husband. He knew Neil was beating me up all the time. I got the locks changed in the flat and he hasn’t come back near the door. I’m trying to do the flat up so it’s nice for the baby coming. I’m skint like but it’s coming together.

I haven’t been talking to my mum in over a year, it killed me – once I met the devil of a man Neil she knew he was bad news and didn’t want me near him. One night we were having a drink at my dad’s friend’s house and then my ex husband kept beating him – kept punching him on his eye and his whole eye was busted. Instead of staying with my dad I left with him. My dad hasn’t spoken to me since.

Now everything is going good, touch wood – I feel far more relaxed now, I’m in a better place. I can’t wait for the baby to come along; I’m so over the moon. My mum is over the moon now too – 10 years ago she wanted me to have a wee boy because I was raped and all and she was scared again but now she’s like who cares what it is? I was only a kid when I was first pregnant. I’m so lucky to have my Mum, I really am so lucky to have her. She said she didn’t speak to me for the year so I  could see what it was like on my own and because I was with Neil. I told her never to do that again I think she was scared in case I took him back or something but he will never be back again.

My son Phil is really excited he is going to have a wee brother or sister. It will be good for him too. Hopefully I get the divorce sorted out soon – I want my old name back. In five years’ time I would like to be settled – happy and content. I really enjoyed sharing my story and I just hope it can help other young people to talk about their problems.