I was around 12 when things started to get bad with them, as in my mum and dad. They were arguing and it got to the point where every time I would hear them going on at each other, even if he just raised his voice, I would pause everything that I had going on and I would go and sit on the stairs to listen to them just in case I would have to go down and get in between them. 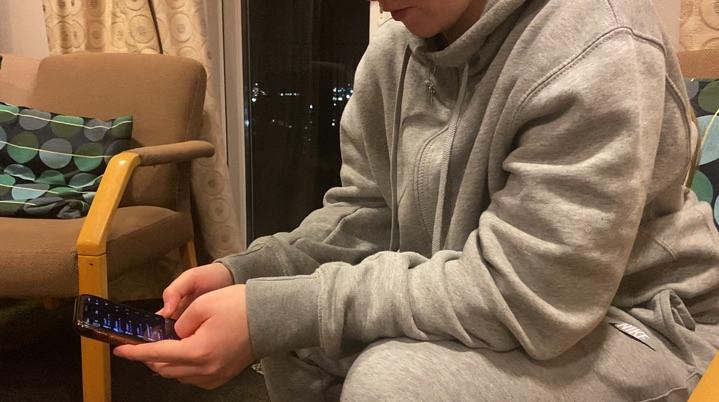 I was around 12 when things started to get bad with them, as in my mum and dad.

They were arguing and it got to the point where every time I would hear them going on at each other, even if he just raised his voice, I would pause everything that I had going on and I would go and sit on the stairs to listen to them just in case I would have to go down and get in between them. I would always take my two younger brothers upstairs away from them to prevent them from having to watch and listen to that. It’s not something you want to see at a young age.

I did not want my brothers watching because I don't want them thinking that it's okay to treat women the way my father did or to even say the things he said to anyone. All I wanted was what’s best for my brothers and letting them sit and watch that was something I wasn’t going to sit there and let it happen.

The fighting, it just started with them arguing to start off with but you never really knew how it would end, sometimes it would just go silent and be over or other times go on for hours. Although anytime I would go to them and ask what was wrong they would always say they aren’t arguing, just having a disagreement. The only time I knew it would get bad is when he would raise his voice first and you could tell by his voice and by his eyes that he was going to act out.

The worst day was the morning of my granny's funeral in 2017 and he was sleeping on the sofa when I came down to wake him up. He was never really a morning person, so I didn’t expect him to react they way he did ten minutes later but it just looked like he was taking his time to waken up.

But I went upstairs and when I came back down he was arguing with my mummy. That was the first time I remember him lifting his hand to her, so I made sure my brothers were out of the kitchen and I went into them to try and calm them down. I didn’t want to leave her alone with him not knowing what he was capable of.

She was about to ring the police on her phone, but he took it and smashed it down on the kitchen worktop, he then smashed the kitchen door that’s made of glass. At this point she was backed into the corner of the kitchen, and I was standing between them because he was grabbing things and trying to hit her with it, so I stayed in between them for a good hour before I rang the cops on my phone and gave it to my mummy and she rang them and I stayed between them until the cops arrived. He was just screaming that he didn't care if they were going to come. Then they did arrive, and he went to the doorframe and stood there saying that he didn't do nothing wrong until they restrained him. I sat at the window watching them put him on the ground, on his stomach and put his arms behind his back and cuffed him. After that day for about three months straight, I just remembered because he was screaming all over the street you're hurting me. I just couldn’t stop that replaying in my head.

That went on until my granny was already buried and my mummy’s face was marked so we ended up not going. I will be angry at him forever for that. He came back a few weeks later. It was fine up until a week after and he did it again, so he got arrested again. I just remember the week before my 13th birthday he was arrested once again and he was released on the day of my 13th so me being stupid went to see him in my grannies cause to me he was still my dad but now I know that is not how a father treats his daughter, but I was young, so I still didn’t fully understand him.

It wasn’t good cause I was young, but I dealt with it and tried to handle it in a grown up way. This other time he was threatening me over messenger sending voice messages and hurtful messages to me and this was the first time I had ever let my anger take over me to fully stand up to him and say the things I wanted to say. Well, he didn’t like that and just kept on going. He had stolen my brothers PlayStation 4 and was asking for his bag of clothes in return for it so me and my girlfriend at the time went to my grannies thinking that he wasn’t there. I had a bad feeling though so I gave her my phone as my number was on red alert with the police, just in case.

I rang the buzzer of my grannie’s apartment and not even two seconds later he flung the door open and started screaming in my face. We were standing there screaming at each other in the middle of the Falls Road until he ended up grabbing me by my two arms and holding me up against the wall, still screaming things at me while I was telling him to let me go. At this point she was on the phone to the police describing everything that was going on and she tried to pull him off me but the grip he had was too much for her. It was hurting me, but he was doing it so that he wouldn’t leave any marks on me. Unfortunately, he’s smart like that.

By the time the cops got there, I was out of his grip and down the street at the side of my grannies. He had run down Broadway knowing what he did was wrong. So, the cops brought me over home in the cop car and I had to give them a statement and let them check me for any marks. I can't remember when he was caught but he’s been in and out of jail so many times that there’s something wrong with the system. He abuses drugs and he’s dangerous.

I never thought that he would’ve attacked me. He’s attacked a lot of people in my family but he's just dangerous altogether. I could see him on the street anywhere and not know if he's on drugs or if he's not so it’s not very settling.

I want to share my story because if there is anyone out there going through what I have went through I want them to know it doesn't stay that way and you don’t have to keep that person in your life, it doesn't have to stay that way and eventually you'll come to terms with it. You can't control your family, but you will meet people that you can tell it to, and they will listen, and it'll just make it 10 times better to just have someone there for you. If there's anyone out there thinking that they have to stay in contact with that person or letting them guilt trip you, they know what they’re doing and honestly if they wanted to change, they would.

Just every time he came back, like in my head, I had everything that I just wanted to scream at him cause I was angry at him, but every time he did come back, I just seen him as my dad again and I let him tell me all these things that I know he didn’t mean. For some reason I always had that tiny bit of hope that he meant it. Every single time I would ask him to get clean and to stay that way for me and my brothers but every time you see him again he’s just on the drugs again, it’s always going to be the drugs over us.

He would sit and tell me these stories about how hard it was to get off of the drugs, to make you feel proud of him, and he just does it again. There was one time I was cleaning my bedroom, I was cleaning under my bed, and I found a packet of needles and at that time I didn’t understand as I was only 12. I gave them to my mummy, and she turned white, and I was just so confused. I don't think he was home at the time, but I know she confronted him, and he tried to deny it. Eventually I did know what it was and what he was using them for, even in my room. Being there while he done everything, I just thought it was normal, he did cocaine in the kitchen behind me, grass, tablets, and I would know what all of them drugs were from a young age and it was because of him. It's just showed me that I'll never, ever touch a drug in my life because it can really change people completely.

All of this, even though it was bad, has shaped me into the person I am today as I have learned from other people’s mistakes. I am happier now and still in school as I got all of my GCSE’s. In the future I hope to have a successful job and be able to provide for myself and maybe even be living in my own flat. I hope this story inspires people and hopefully makes a change.