(April 2018) - 20 years on from the creation of the Good Friday Agreement we ask a group of young adults, women, refugees and asylum seekers from North and West Belfast to tell their stories, detailing their past and current situations and aspirations for the future. 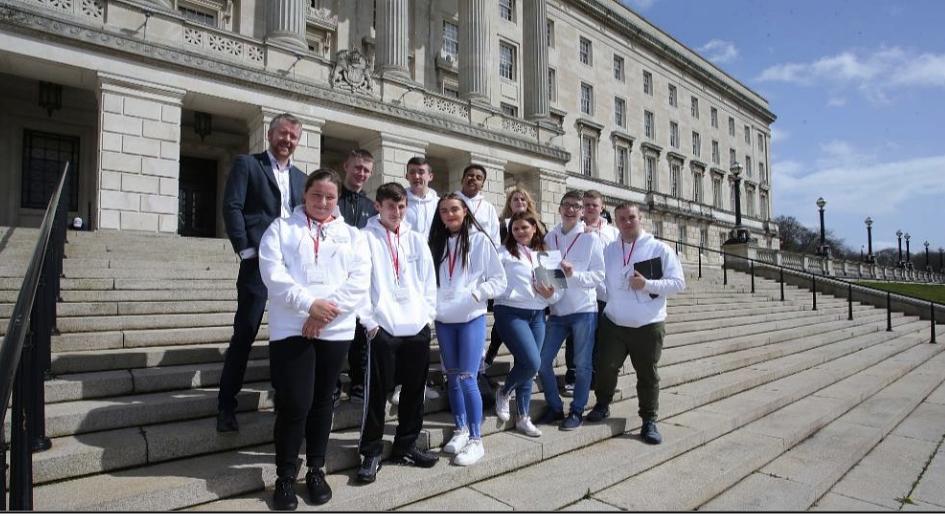 Quaker Service’s work has always been founded on a belief in the worth of every person and a commitment to speak truth to power, no matter how tough that truth may be.

On April 17th 2018, a group of young people from across our community gathered to tell Stormont leaders the reality and challenges of life in their communities, 20 years on from the Good Friday Agreement.  Through book and film, the participants’ first-hand experiences along with personal stories by women and asylum seekers were shared at the Northern Ireland Assembly.

Director of Quaker Service, Janette McKnight, said the charity, which works with marginalised and excluded teenagers and families, wanted to give a platform to people not often heard by officials and decision-makers:

“The families and young people we work with tell us that violence, poverty and pain are still an everyday experience, 20 years on from the Good Friday Agreement. We wanted to create a space where they could tell their own stories, frankly and freely, to decision-makers. Often it is young people and women who bear the brunt of the legacy of the Troubles and today’s social problems yet are least likely to be heard by those with power and influence to make a change.

“We also wanted to include people who are newly arrived in Northern Ireland, often from conflict and crisis elsewhere – again we don’t often hear first-hand from asylum seekers and refugees what it’s like to live in our communities. We were delighted to work with Homeplus NI, which supports asylum seekers and refugees, and Belfast film-making charity ESC in making this project a reality.

“Quaker Service’s work has always been founded on a belief in the worth of every person and a commitment to speak truth to power, no matter how tough that truth may be. By increasing understanding of how things really are, showing that things have not improved for many and suggesting what needs to happen for their lives to improve, the participants in ‘My Story’ show that they have in themselves the potential to bring about change.

Over several months, 18 participants from both sides of the peace wall in north and west Belfast, worked with Quaker Service to articulate their own life stories, detailing their past, current situation and aspirations for the future. This culminated in a residential where the young people shared their stories for the first time in a supportive environment.

One participant, 20-year-old Sean from West Belfast said: “After reading my story back to myself it has made me realise that there were a lot more things that have happened in my life that have affected me. Until you take the time out to read your story you don’t realise how much other things that has happened in your life and the way that it affects you. My hopes for the future would be to work with young people and to help bring about some sort of change which is really needed in Belfast today.”