Hey, my name's Phoenix. My friends call me many different names because my birth name holds a lot of trauma behind it. So, I changed it. It was also very feminine, and I didn’t feel comfortable with that. 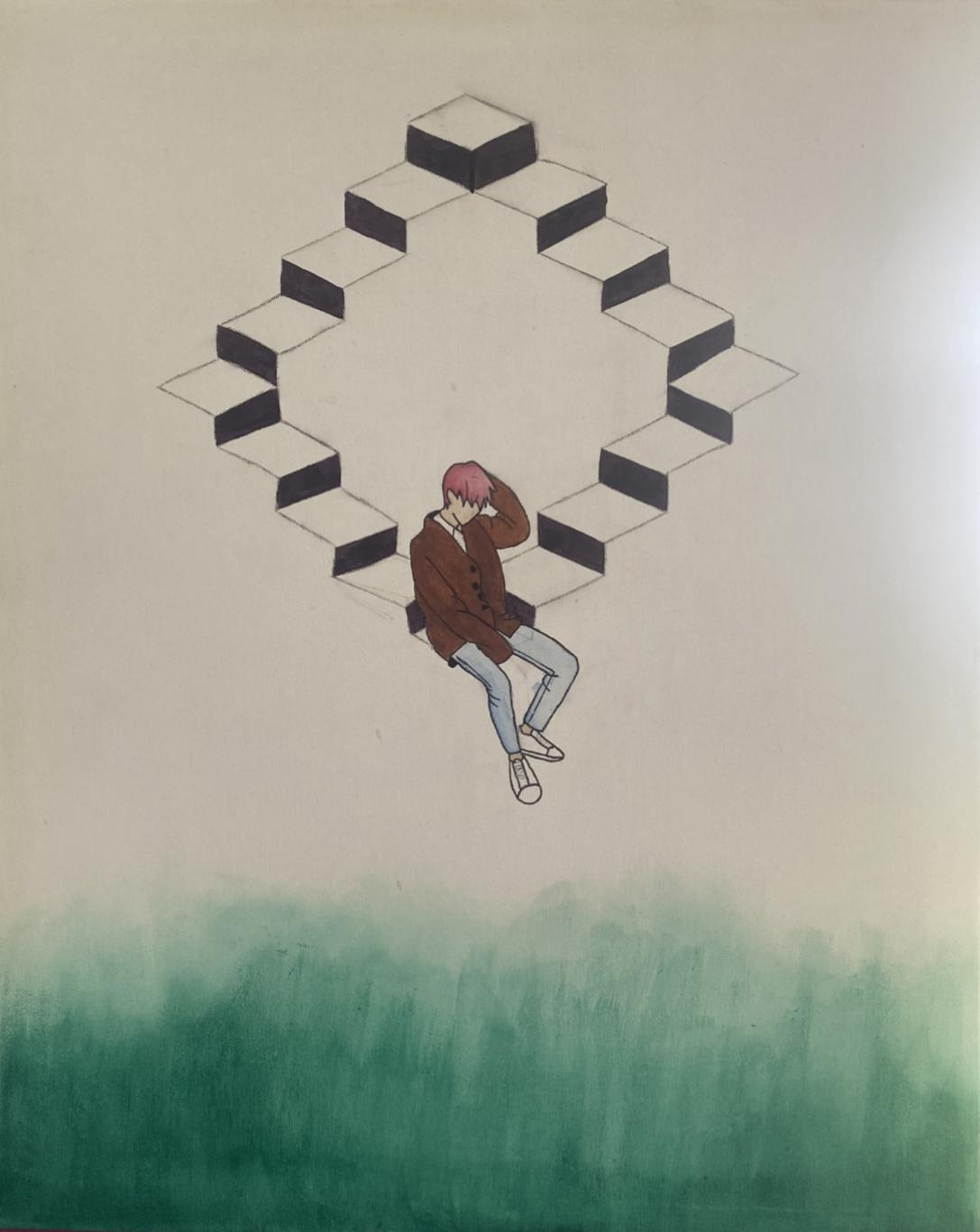 Hey, my name's Phoenix. My friends call me many different names because my birth name holds a lot of trauma behind it. So, I changed it. It was also very feminine, and I didn’t feel comfortable with that.

For the last couple of years, my friends have known about the name change, but it's just over the past couple months, my family has found out by me telling them.

I just sent my mum a text when I was at school. I was worried how she would react because she didn't fully understand the trans community and didn’t react well to me telling her about my friend coming out. After I sent the text, I turned my phone off until the end of the day. When I finally turned my phone back on, I seen her response “Its ok just be who you are”.

I thought it was going to be different with me and my mum. It's not. The main difference is between me and my sister, my sister found out and she's not the most supportive. Our relationship wasn't the best to begin with, but now that she knows there’s barely a relationship there at all anymore.

She doesn't like the fact that her only full sister is no longer her sister. She sees me more of a brother or sibling now that I present more masculine.

My story begins when I was around three years old. When my stepdad first moved in with me, my mum and my sister at the time, everything was fine and me and my sister had a good relationship with our stepdad until my first brother was born when I was six. Then my stepdad took a disliking to us now that he had his own kid.

He would tell us that we shouldn't be there, He's not our dad so why is he with us. Just little things that you shouldn’t say to a four and six year old. I felt like a visitor in my own home, as if I wasn't wanted there, as if I didn’t belong with my mum and brothers. He made both me and my sister feel as though we were unlovable. Even to this day that thought sticks with us ‘what if they don’t really like me?’ A question I ask myself daily.

I was around 12 when my mum realised that maybe he wasn't the best person to have around the kids. So, she kicked him out, but he kept coming back every week or so and he would stay for months at a time and my mom would throw him out again. The loop. During those months, each time he came back there was always a fight, at least once or twice a week. Things would be smashed, things would be thrown and everyone would be left on edge for the rest of the day.

I’m the oldest so naturally I wanted to protect my younger siblings. My room is their safe space. It’s the furthest away from the living room and kitchen and it’s also the biggest room, so it was the best place for them at the time.

I always had toys, iPads, tv, computer, teddys, blankets, cushions and even a spare bed in my room to distract them from what was going on downstairs. After I had everyone in my room I would go down and sit outside the bathroom to listen in case things got too out of hand and I needed to step in. Me and my mum had hand and vocal signals. These were a way for my mum to tell me to call the police without my stepdad knowing. We didn’t want him to know incase it made him more aggressive or run before police arrived to remove him.

Once I was older, I went to boxing for self-defence. I went to different judo and karate and different things that would help with self-defence. My stepdad wasn’t a very big person, not that tall either, so we were a pretty even match by the time I was around 13 and because of this I felt the need to protect my mum as well as my siblings. From then I would have to get in between my mum and stepdad. I would take what my stepdad was targeting towards my mum. I was then seen as the ‘weapon’ of the family and still am.

It was just after I turned 13, seven of my friends were staying at my place. My stepdad had been over earlier that day to talk to the boys but he had said “See you later girls” to my friends. We didn’t think anything of it because that’s a normal goodbye, isn’t it? But there was something about the way he said it that didn’t feel quite right. Later that night 3:30am, me and my friends were in my kitchen getting food when we seen a shadow pass my window then a knock at the door. I knew it was him. He then proceeded to look through the curtains, walking back and forward past and trying to open the window and knocking the door. He did this for around 20mins before we heard one final thud on the door as if he had kicked it. Then he left 2 weeks before my 14th birthday, I was put into foster care because of a situation with my mum. The same day I was put into foster care was actually the same day the first Covid-19 lockdown was announced. My mum was admitted to a mental health hospital. She was supposed to come back home after 2-3 months but because of covid and the bubbles she wasn’t able to, and so she stayed with my uncle as it would be mixing with less people. She stayed there until early 2021. It wasn't until after my 15th birthday that she had fully moved back into the house, so because of COVID she was kept away longer than she should have.

My granny was our legal guardian during the time and she couldn’t handle all 6 children so she made the decision to send the 2 youngest boys to different foster family’s in April 2020 and we didn’t see them again until September 2021. The youngest was 4-months old when he went to his foster family which made it weird when they came back. They weren't even little babies anymore. They came back being able to walk and talk. We missed the youngest’s first Easter, Halloween and birthday. The older one was scared of everyone other than my mum, because over the time he was in foster he had FaceTime calls with my mum, so he kind of recognised her face and voice. She was the only person he trusted when he came back. It’s been a couple months from then and he still doesn't fully trust anyone else.

I’ve never had the best relationship with my biological dad either. We were never very close growing up. We would argue a lot about different things and I never really trusted him. In December 2019 I went to see him in my aunts’ house to ask him to sign a form so I could get my new passport for a school trip coming up. I’m not sure exactly why but he snapped, in the matter of seconds I was being held against a wall by my wrists with my dad screaming in my face. I’m not sure exactly what he had said as my main focus was to escape. My aunt, uncle, cousins and even family friends did everything they could to get him off me but were unsuccessful. When he finally did let me go, I ran. He was calling me as I did so but I refused to even look back at him. From then I’ve cut all contact with him and the only ‘contact’ we’ve had from then is seeing each other in the street as we live quite close to each other.

My mental health was already at rock bottom but I just kind of dealt with it. I was 12 when I found out my mum was pregnant with her 5th child. That was the only thing that kept me going for a while. “Stay long enough for the baby to know me” that’s what I kept saying to myself. I was 12 when we went to stay in the caravan over summer. There was one day everyone was going to the park, but I didn’t want to go so I stayed in the caravan. Not many knew about my mental state other than one friend. I was tempted to just give up there and then, but I didn’t want to ruin summer for the rest of the family. I never did anything, but that was the first realisation that I need help. When I was 13, I fell into a self-harm addiction that went on for years. Then there was a time I wore short sleeves again for the first time in years and mother had noticed the scars on my arm and her reaction to it was “if you do it again, I'll cut your arm off. You'll not have an arm to cut”. Which obviously didn’t help or make me stop, it just made me better at hiding it.

Mental health has always played a part in my life. It tends to run on both sides of my family and I’ve lost both friends and family to suicide and because of this I’ve become very interested in physiology and intend to study it in the future.

My advice to other mums or dads or anyone who's worried someone they love may be doing the same thing is to just stay calm, ask if they want to talk about it and if they don’t want to don’t force them to. Give them time and let them know you’re willing to talk with them if they want to. My advice to other young people would be that it eventually does get better. I know you hear that a lot and probably don’t believe it and I didn’t believe it either but now I know it is true. Although I still struggle with PTSD and flashbacks to parts of my story I’m not quite ready to share with the world yet. There was a point I didn’t think I was going to make it to 16, now look at me. I’m 16 soon to be 17 and probably the happiest I’ve ever been in my life.