"I have had a bad childhood but that doesn’t explain or let me away with every bad choice I have made." 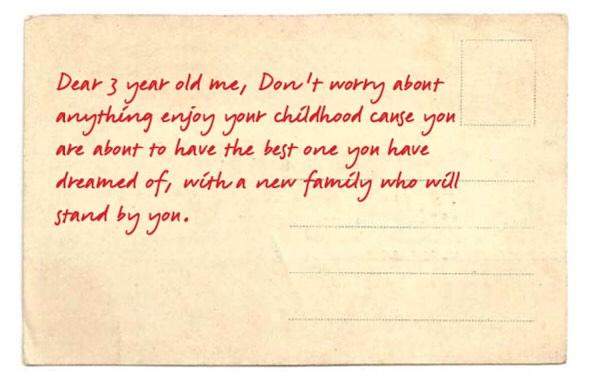 I’m 23 years old. I started this art class a month ago and I really enjoyed it. I have met new people and I feel more confident to talk to people and let some of my thoughts out. I have had a bad childhood but that doesn’t explain or let me away with every bad choice I have made. When I was younger I went into foster care, where I went to a couple of foster homes. Then when I was 4 I went to my current family and have been there for 19 years. They’re my family, I’ve been with them for so long, they kept me on after I was 21 they didn’t have to.

In 2006 I had a bad boat accident. It ripped my nose, lip, collar bone and cheek open. It also left me with 5 false teeth. This is when I lost all my confidence. And in 2007 I had a car accident that left me with a broken leg which resulted in me getting a rod and three screws in my leg. Then in 2009 - I found out my foster mum had cancer. That broke me in half; my whole world just went from me. I wasn’t myself, that’s when I started going downhill. I started driving without a licence. I was thinking I had to drive to help my mum and dad out and when I got caught I didn’t tell them. Mum was really ill and dad was worried sick about her. So I kept driving helping pick up my brother and sister going for things. Looking back I did it because they have stuck by me all my life.

The night I spent in the cell was scary. There was a woman in who was driving while disqualified as well but she was drunk and there was some man who was in for attempted murder and he just banged his head against the wall all night. I was in the middle of them both and was just terrified. I think I slept for like 4 hours. I just put my head down - I was crying and shaking then fell asleep.

Then the next day I woke up I said to the officer ‘I’m never stepping foot back in here’. I was caught driving while disqualified – I was doing a favour for my real family. But when the police stopped me they didn’t care, they walked away and left me on my own. They arrested me for a bench warrant from a few years ago. See I hit a car and apparently I ran, like a hit and run, but I stopped and gave all my details and when they said they were phoning the cops I just starting thinking about my mum not being well – I took a panic attack and drove off. And I never appeared in court for it. So that’s what the bench warrant was for.

It’s weird now when I’m filling in application forms, it asks for criminal convictions I fill in yes driving convictions – but when I’m at interviews I get really nervous and feel weird telling them I have a probation officer. It’s really frightening to tell people. Because they just look at you and say you’re not worth it. I have lost most of my friends because I got a probation officer.

My mum didn’t want me being a part of this group, because she knows all the women have been inside apart from me. She thought I would have been misled. My dad was encouraging me to go to see how strong I was and if I could say no. Before I found it hard saying no to people because I felt like I was hurting them but now it’s getting easier. In this group it’s a lot easier to talk, they’re really nice people, but when I look at their life I think my life is not that bad. I’m more comfortable because I know what not to do, I know all their difficulties and I’m learning from them, as well as being here and talking about stuff and writing it down. It’s so much easier for me. My counsellors haven’t been as good as this group, he’s crap he interrupts me every time I try to talk about something important. In here I can just write it or draw it, it’s so easy and I feel better when I leave here. I’ve started playing the piano a lot more now since I started coming here and my mum has noticed, she said it’s nice to hear you playing again. I’m a lot more confident and I’m not thinking about stuff I shouldn’t be thinking about.

I was going to talk about my real parents but wasn’t sure? They are the reason why my heads been messed up and I needed counselling. After my daddy left my mummy’s boyfriend did nasty things to me. I can’t forgive my mum for what happened; she let it happen to me. Now my real dad is shouting at her and brings me into it. They bring me into fights which I don’t want to belong to. She put me in foster care then phoned my dad up and said your daughters in foster care she’s up for adoption. Then he took a psycho – said she should have told him and he would have taken her.

The abuse from my mum’s boyfriend happened when I was 3, she met him a couple of months after my daddy left. He did nasty stuff to me, physically and the other word I don’t want to say it. I had to go to counselling because of it. I could talk to the police about it so much and then I would stop I tried speaking to them again when I was 7, but I stopped again. But I randomly met him and he grabbed me in Newcastle a couple of years ago. He said – ‘I’m going to get you, I know what you’ve done’. I tried to talk to the police again but I couldn’t, so stopped. I try speaking to the counsellor but he keeps interrupting me so I can’t really talk about it. My dad now wants me to talk to the solicitor because of that Jimmy Savile stuff which all came out. He wants me to tell them, I want to come out and talk about it because of all the other girls who are able to do it.

I don’t really want to talk about it, I have had nightmares for years because of it. It’s not nightmares it’s the nightmare since I was 4 - the same nightmare over and over again. I self-harm myself in my sleep, I’ve even woke up with a black eye once and scrab marks around my neck and it was me doing it because I had blood around my finger nails. Apparently I’m not the only person he has done it to – I’ve met someone else who said she was abused by him to.

I feel now like I’m halfway up the hill, being in this group has helped me get some confidence to talk about it. Even my mum said she’s starting to get her daughter back. I meet another woman from the group and we get the bus down here together, we have a laugh on the bus. I want to be happy – I want to be happy within myself.