"My Name is Sean. I was born in Belfast in 1994. I have lived with my granny all my life. My mum died in a car crash when I was only a few months old. My granny has looked after me ever since. 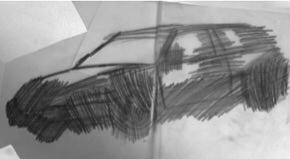 My Name is Sean. I was born in Belfast in 1994. I have lived with my granny all my life. My mum died in a car crash when I was only a few months old. My granny has looked after me ever since. I have two sisters and one brother. One of my sisters died last year; it was all over the papers yesterday. She died from taking solvent and drugs. I think it just hit her in the heart. We had a brilliant relationship, we were really close and looked out for each other. She was 19. I found out when I was in prison.

I was shocked... my social worker opened the door and said that my sister had died. The judge gave me 24 hours to go out and mourn; my father was given 12 days. I didn’t end up going back to the prison – I went on the run. I went on the run because my head was melted. I wanted to be with my family. The police were looking for me everywhere; I went on the run for four weeks. It took them four weeks until they caught me, BALLOONS!

When I was younger I did my own thing. I used to buy old motorbikes, fix them up, and then sell them on to make money. I started doing it at 11. In school I was the class clown showing off all the time. I didn’t like school apart from reading, I liked reading stories and reading newspapers. I moved from mainstream school to St. Vincent’s, it’s known as the second chance school. I liked it there because there was more help and the days weren’t as long.

I got to do more things like art and cooking. We got to go out on wee trips and got to wear normal clothes it wasn’t like normal school more like tech. At 14 I moved into my first children’s home. It was mad! I moved there because I started taking drugs and drinking and thought if I went there I could get away with everything because they couldn’t tell me what to do. When I went there you could do what you want when you wanted. No one could stop you. It was the children’s home staff telling me what to do, but I just laughed at them and told them to fuck off. It wasn’t like my family telling me what to do.

When I was in the home, I started drinking and taking drugs a lot more, doing it with older people - they were about 5 years older than me. I used to go out and take drugs with them; then, I started getting into stolen cars as a passenger, then, I started driving them myself. At the time it was powerful; I liked to show off. Your adrenalin goes. I liked to drive them at high speed. You get a good buzz. When I was in the home, I started off doing petty crimethieving and criminal damage. Then I started moving on to car crime and burglaries. By this time, I was on drugs every other day-tablets known as blues.

It was good – they gave you balls to burn. I ended up over dosing a few times on them. In total I overdosed 10 times, and I was in hospital each time. I just didn’t give a fuck. I was off my head. Looking back now I regret it. Once I went to jail I was thinking, “what was I at?” I didn’t care about anyone else but myself. About two weeks before Christmas in 2009, my kidneys give in. There was a blockage in my kidney because of drug misuse. I was in hospital for 2 weeks over Christmas... it was fucking shit. I was stuck in the hospital bed, while everyone was out partying. I wanted a proper Christmas dinner with my family.

After Boxing day, I did a runner. I ran out of the hospital and met up with friends. The doctors where saying it was life threatening, and that they wanted the children’s home staff to keep a close eye on me. But after a couple of weeks, my kidney sorted itself out. Shortly after that, I was in and out of JJC  (Juvenile Justice Centre). It was for car crime and burglary. Then I was in and out on bail and got involved in a robbery. I did six months on remand and then got out on bail. Two days later, I was involved in an aggravated burglary and a police chase and have been back in Hydebank ever since. I’m doing a 6 and a ½ year sentence now. I was doing the crimes because I was on drugs and thought I could get away with it and thought I was a big boy but it wasn’t worth it. I wish I could turn the clock back to when I wasn’t involved in serious crime. It was drink and drugs and showing off in front of older people that got me involved in serious crime.

I want to get out and make my granny happy. I have had loads of time to think what I want in life and for when I get out. I want my granny to be proud of me, I don’t want to be involved in crime all the time. It’s not going to be easy; once you have a name for doing crime and all that, people just expect you to keep doing it and doing it. I don’t want to be known as a jail bird. I want to get out, keep my head down, get a tech placement, and get a part time job. I only want to go out at weekends and have a drink with people who are not involved with crime.

In here you have your good days and bad days. It’s crap missing your family-it melts your head. I see my granny every week. It’s sweet, although it’s only for an hour. When I get out, I’m going back to live with my granny, chill out, and go and see friends and family. I plan to stop running around with all the headers. I don’t want to come back to jail. I want to find a wee girl and settle down with her-someone who will keep me out of trouble. Some wee girls do that.

My advice to other young people would be just listen to your family. Don’t be trusting other people who you do crime with. They’re not friends; they’re just associates. A friend would always be there for you - someone you could trust with anything. I want to go on holiday when I get out. I want to go to Spain or something with some wee hussy.